Abstract: This article is about the Romanian presence abroad and the discoveries I made throughout the years in the 40 articles I wrote and published in Romania and in diaspora papers and magazines in Romanian. My self-imposed mission is to make cultural Romanian aspects known. There are three categories in which we are known: the classics (such as Constantin Brancusi - abstract sculpture, and Eugen Ionesco - the theater of the absurd), the world-class sports achievers (such as Nadia Comaneci, Ilie Nastase and, more recently, Irina Halep), and Dracula (this being at the top). Then there are Romanian achievements known only by those in a specific field of activity. Even us as Romanians do not know many of the accomplishments of which we should be proud. Unveiling the positive aspects of Romanian culture is necessary and I will continue the hunt for my discoveries.

For many years I have written and published articles on the theme of my self-imposed mission: making known my discoveries about the surprise Romanian presence abroad. Romania has so many beautiful things to tell the world and there is a Romanian presence almost everywhere. Yet even we, those from Romania, don’t always know about them.

Figure 1. Ileana Costea studying a book in which Brancusi’s art is mentioned. Books, the Internet, and field studies are her tools.

Romania being a small country, located in “the armpit of the Soviet Union” – as I used to tell my students who did not know where our beautiful country is on the map,  is seldom officially recognized in the vast world as being the place of origin of successful and famous people.

There really are only three categories in which we can say that we are known: the classics, the world-class sports achievers, and Dracula. And yes, Dracula (about whom, with shame I must confess I first heard when I came in the US in 1972!!) is always at the top, followed by Ceausescu’s violent killing in 1989, and then probably by Nadia Comaneci, the Olympiad-gymnastic winner, and Ilie Nastase and more recently, Irina Halep, the tennis players. Then follow the exceptional skills of Romania trained computer programmers and analysts, whose hiring in large numbers at Microsoft Headquarters in Seattle, Bill Gates had to justify to the US government: why non-resident Romanians and not Americans?

As for the classic Masters famous world-wide, such as Constantin Brancusi (creator of the abstract sculpture), Eugen Ionesco (father of the theater of the absurd) and Tristan Tzara (founder of the Dada nihilist art movement), they are believed to be French, because it is in France where they worked most of their lives. Only seldom a more cultured non-Romanian or a foreigner with some Romanian connection (a wife, a colleague, a Fullbright scholarship in Romania) will know that they are originally from Romania.

Some important Romanians are well known mainly by people in their field, such as: Mircea Eliade – whose books are used in most of the American Universities in history of religion courses and most probably, since he was a professor at the University of Chicago, he is believed to be an American scholar; Emil Cioran, who is famous only among philosophers and mostly in France, where he was made a member of the French Academy, an Institution very difficult to penetrate, especially as a non-French, yet quotes by him are found in many cultural events; composer George Enescu, more known in Europe, although played from time to time on radio stations in California and maybe also in other parts of the US. The only person from Romania who is better known among non-Romanian university intellectuals in the States is Andrei Codrescu from Brasov, because of the visibility he obtained through the intelligent and humorous shows he made for years on American National Public Radio.

In short, we must accept that Romanians and their accomplishments are simply not well known. Yet, there is a “hidden Romanian hand, head, and idea” almost everywhere around the world. Few people know that the Eiffel Tower was made following the innovative assembly method of an engineer from Iasi, Pănculescu (legend or reality?!); that the head of the colossal statue of Jesus Christ at the summit of Mount Corcovado in Rio de Janeiro was created by the Romanian sculptor Gheorghe Leonida; that the leaders of the French Institute of Petroleum near Paris, France claim that they learned how to process oil from the Romanian school. These are only a few of the beautiful hidden Romanian treasures that need to be discovered.

That there are few museums in the world to not have a Brancusi sculpture (be it in Paris, New York, Chicago, Canberra, Australia, or Rio, Brazil), and that there is no book of modern art or history of art which does not mention his name is not a surprise. But in my travels I discovered an unexpected Romanian presence almost 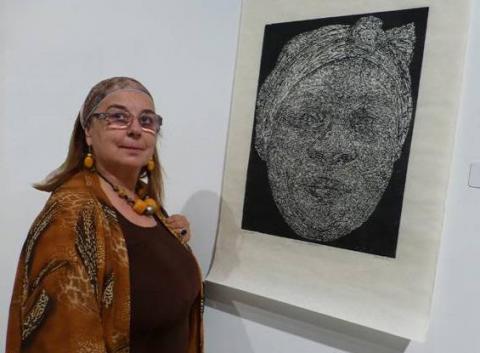 everywhere, in large art events, as well as in smaller less famous ones: paintings by Aida Tomescu in many galleries and museums in Australia; a gilded Maramures gate by the sculptor from Cluj Mircea Catontor in the large event La force de l’Art at Grand Palais, Paris, 2009; paintings by Adrian Ghenie at Palazzo Grassi in the exhibition ”The World belongs to you,” Venice, 2011; two etchings by the printmaking artists Florin Haţegan and Raluca Iancu [1] in a small exhibition of the National Society of the Art of Printmaking at CSUN, Northridge, California. The very well known Romanian play directors Liviu Ciulei and Andrei Serban have not been the only ones active on the US Theater stage. More recently at the University of California Irvine (UCI) one could see impressively beautiful plays staged by Mihai Maniutiu, professor at the UCI Claire Trevor School of the Arts (The Bacchae Trilogy and The Electra Project). In Europe and the US everywhere there are Romanian professors of literature, of mathematics, of engineering, etc. The list is long and it is growing.

Although we, Romanians, of course know our classics, we are not necessarily aware of the Romanian past and contemporary presences which were not held in the limelight.

How many of us know that:

·   Romania is ranked on the 6th place in the world and the 2nd place in Europe in professional competence and intellectual training?

·   Romania is at present the outsourcing alternative to India?

·   Queen Mary of Romania has a museum in the US, the Maryhill Museum of Art in the state of Washington, not very far from Portland, Oregon?

·   There is a bust of Romanian biospeologist Emil Racovita on the harbor promenade of Palma de Mallorca, Spain?[2]*

·   Lauren Bacall’s mother was from Romania?

·   In Culver City – LA there is an Art Gallery held by a Romanian: Mihai Nicodim?

·   When Frank Coppola won fame and the freedom to make movies he chose to make, in 2007 he selected the novella by Mircea Eliade “Youth Without Youth” for his fantasy drama film with the same name?

·   A known anatomy term is called “Gerota’s fascia” or “Gerota capsule” after a famous Romanian surgeon from Bucharest?

·   The first sculpture by Brancusi was an ecorché – the anatomical shape of the human body– ordered to Brancusi by Prof. Dr. Gerota?

·   The well-known English playwright Tom Stoppard wrote a play (Travesties) in which one of the principal characters is Tristan Tzara?

·   Hammamet, Tunisia became a well-known seaside resort due to a beautiful Mediterranean villa built by a Romanian, George Sebastian? (You ask the local guide about the owner and the answer comes right away: “An American.”)

·   Hollywood starts have their eyebrows shaped by a Romanian cosmetician, Anastasia Soare?

·   We have successful fashion designers (Aurora Cercel - Eva Culture, in the US) and successful trend setting stylists (Smaranda Schaechtele* in Germany)?[5]

·   Dumitru Berea*, a Romanian painter, has a museum in the city of Berea?[6]

·   Picasso and other artists, not only Matisse, painted a Romanian blouse (“iie”)?

The main theme of my articles (soon to be published in a volume) is the same as the title of this presentation “Surprise Romanian Presence Abroad.”

Each of us, Romanians living abroad, can contribute to make known to the world the beautiful things we have; hence my self-imposed mission which is not accomplished yet. I am still on the hunt for more discoveries of Romanian presence …